Why is Rank math better than Yoast SEO? 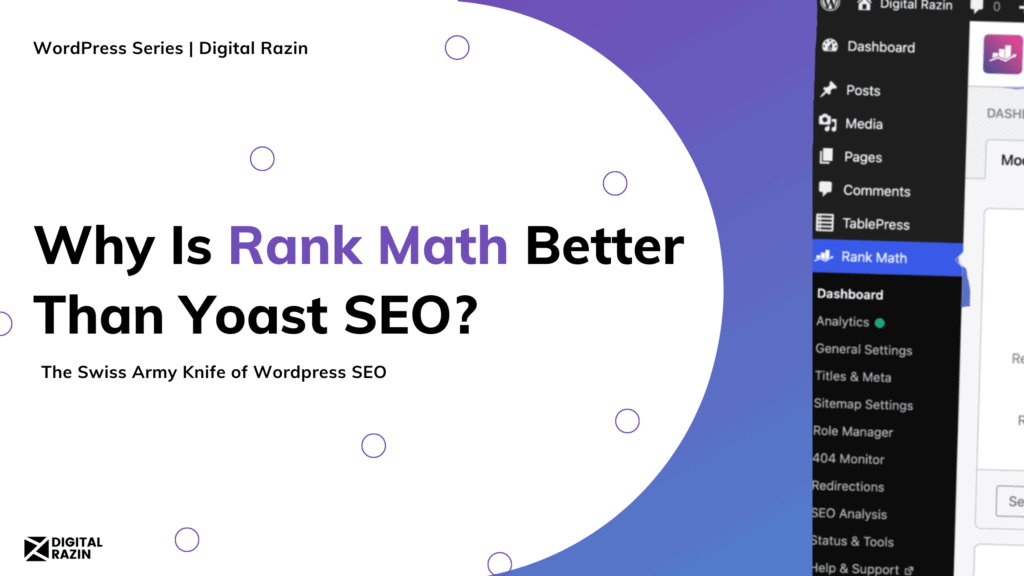 What is the one thing that comes to your mind about the WordPress SEO plugin?

Yes, I know Yoast is famous and it has more than 5 million active installed but from now on Rank math is going to dominate the SEO race on WordPress.

Because rank math has the best quality of features that Yoast doesn’t provide and if you haven’t try Rank Math yet, then you are missing out on one of the valuable SEO plugins on WordPress.

I know, you must be having a doubt, why am I praising Rank math for?

Let me explain why?

Yoast has been dominating the SEO realm for years, but recently Rank math has emerged as a new competitor for SEO plugin where they are building a successful community on WordPress.

It has been getting a quite positive review from various web developers around the world and its growth is something that is unbelievable.

Let’s talk about what, how, and why Rank Math is a better choice than Yoast SEO?

What is Rank Math SEO?

Rank Math SEO plugin also called “ the Swiss army knife of WordPress SEO “ is a FREE and PAID plugin that helps our website to rank on Google. It helps our web page or blog post to identify the actual problem we are facing to rank for specific web content.

It also helps us to get a clear vision of how an individual should rank his/her website in a simple way. Rank math takes care of basic and advanced SEO for your website.

The best part is, most of the features are FREE and this is where they score a major role with a total installation of 700,000+ and it has a 4.9-star rating.

They also provide a PRO version which is pretty cheaper than Yoast and other SEO plugins out there.

Rank math has the best user-friendly functionally compare to any other SEO plugin out that and the most interesting part is that it comes free and paid plan, where I recommend beginners to use the free plan which more than enough to start a website.

The free version itself provides a lot of features but when it comes to PRO, you will some more features which is insane to imagine because you will get full control of the plugin to boost your website very well in terms of SEO.

Why Rank Math is better than Yoast SEO?

So I have listed out why it is far better than Yoast SEO,

NOTE: I will be explaining all the features, so don’t miss out on anything.

When it comes to UI/UX a.k.a user interface/user experience, Rank math plays the dominant role in WordPress because I have used both Yoast and All-in-one SEO for the past few years.

Rank math is one of the most user-friendly compared to other SEO plugins out there. With a very clear interface, even an amateur of WordPress can easily set up the plugin.

That is where Rank Math developer scored the major role because when I recently migrated from Yoast SEO. I find it very simple to understand the interface to set up my wizard in WordPress.

I can surely say, Rank math developer grasped the customer’s point of view to have a better UI/UX than any other  SEO plugin. Check out the Rank math dashboard, 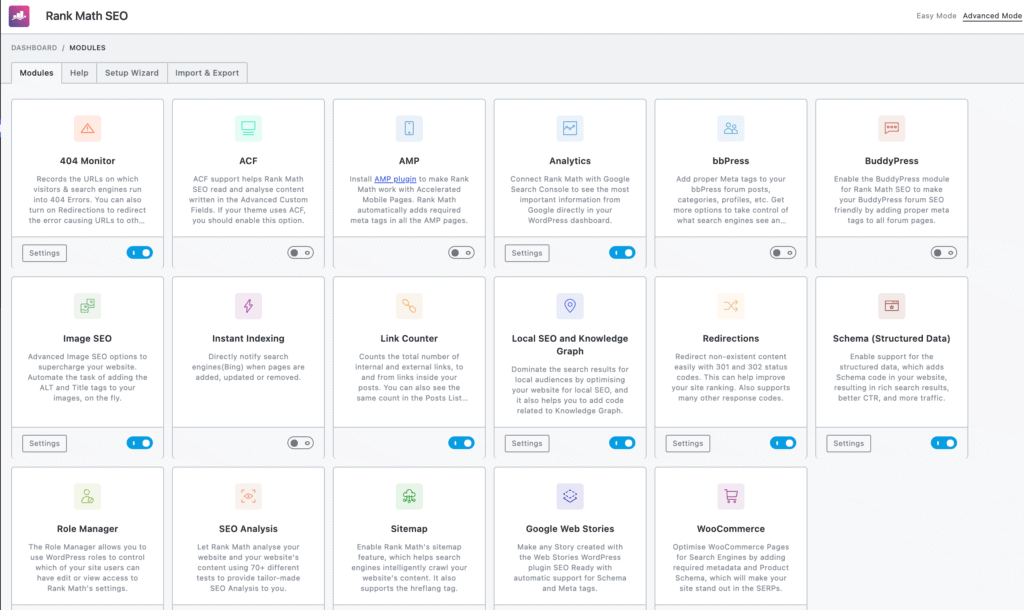 They have a visually attractive interface where they have enhanced with the modern lite theme.

There is a famous saying, “ Simple yet Powerful “. I think this quote is more suitable for the rank math SEO plugin. They have provided a clean and well-organized interface, where a newbie can surely figure out how simple to use an SEO plugin.

Rank math has made it simple to set up the wizard to get the basic information of your website. In this process, you will configure half of the SEO setting for your website such as analytics, sitemaps, and so on. 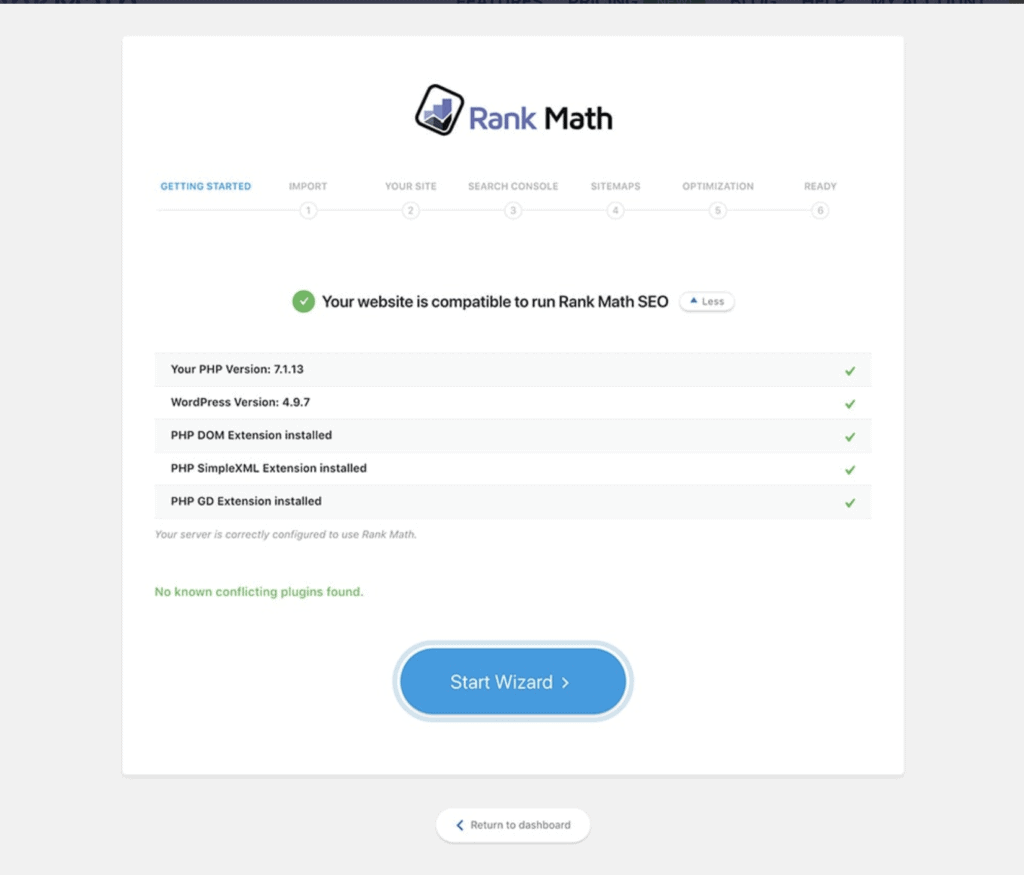 The setup process will make you understand the benefits of Rank math because the setup wizard is more detailed and better-described Rank math and how it works.

For instance, you can automatically select a specific element such as the “ No index ” tag to certain categories.

You can connect Google analytics, search console within the setup wizard process. If you have the PRO version, you can easily connect your Google Adsense to get more useful data audit about your website. 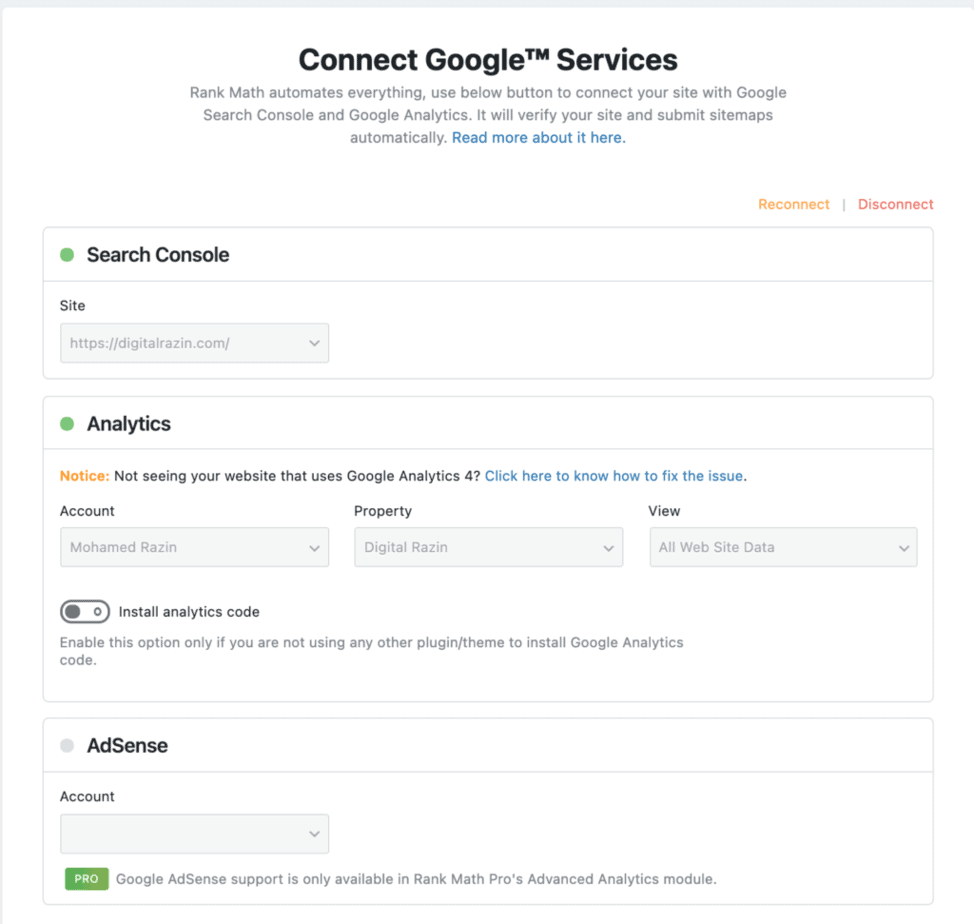 Let’s talk about the feature in Rank math and I will be comparing it with Yoast SEO to get better clarity,

The only thing that every plugin on earth shouldn’t do is not to show ads about their premium version of the plugin. Just take a look at the Yoast SEO and Rank math dashboard, just compare it and see how Rank math made a dashboard simple and easy UX a.k.a User experience.

For example, when a WordPress beginner wants to install an SEO plugin to boost up his/her blog post or web page. 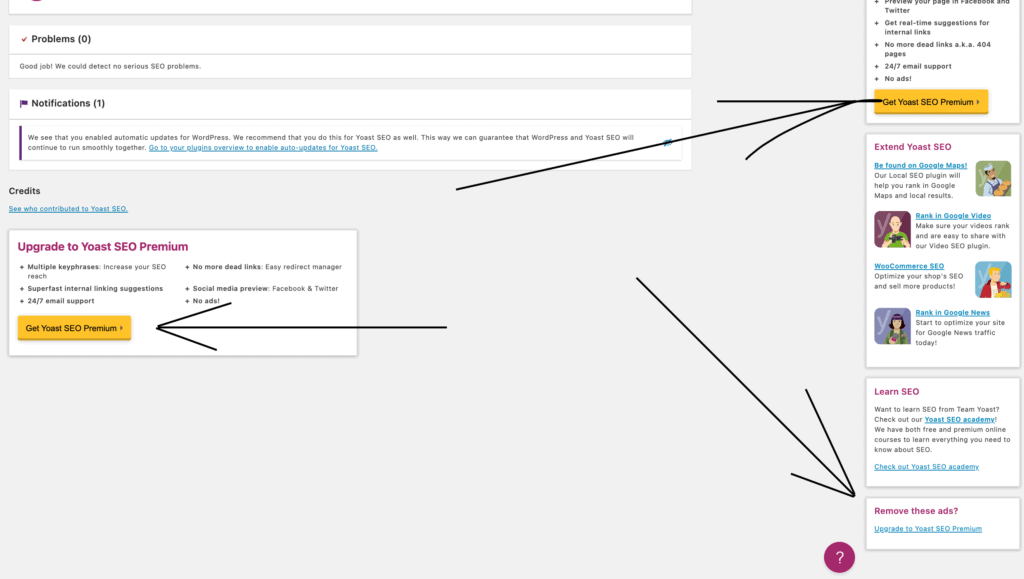 It might feel so complicated to set up the starting wizard, but when you have a clear dashboard that directs you to set up each and every step in an uncomplicated way.

The newbies can easily make the best of it and if they really in demand of a premium version to access more features then you can definitely purchase the PRO version.

So that’s where Rank math played a major role by making the dashboard very simple and clean to make the user experience great for all.

Since I have used both a plugin, let me list out the Pros and Cons of both the SEO plugin. So in my opinion, both the plugins have the best performance in the spirit of features that are in Rank math.

While doing my in-depth research, I found that rank math is 3x smaller than Yoast which means rank math plugin 3x fewer lines of code and your website will get the benefit from fewer PHP requests to be faster.

In terms of SEO performance, Rank math delivers great results comparing to Yoast but it doesn’t mean that after switching to rank math you will get immediate results.

Everything takes time to achieve a state of flow likewise, this plugin will give you an amazing performance once it achieves the state of flow.

For instance, when you start writing more articles on your niche, google immediately won’t recognition your content to rank on the first page.

But Search Engine Optimization is the major factor when it comes to rank on the first page of the Google search engine.

Pros & Cons of both SEO plugins

Yoast SEO has been on the market for 10 years since it is released and it assured you that every process in the plugin process pretty well and not causing any problem. The most important is its compatibility with all the other themes and plugins of WordPress.

Everything runs smoothly and the update is made regularly but when it comes to supporting, the Yoast team takes much longer than casual to reply to all the queries of the free version user.

Because they give prioritize only for the premium user who pay few bucks to get the PRO features.

As I mentioned above Yoast has resisted many features in the FREE plan which is any other drawback, because Rank math provides much more useful features for the FREE version where beginners get the opportunity to use the best out of it.

Even though Yoast SEO made its reputation high since it was released 10 years back, now Rank math is exponentially remarking past few years because of its great features and user interface.

As I specified before, Rank math has a FREE version which itself has the better features for a beginner to get the best out of it.

It is really easy to track the basic SEO, title, and content readability for your blog post. The exciting feature is that if you miss out on any image alt tag on your blog article, this plugin itself takes care to give the image alt tag as the blog title automatically if the user forgot to add one.

When it comes to Cons, I think there are a few which is not a big deal for any users to worry about because they have great team support to assist you when you have any issues.

After doing my research, I found that many users have an issue with a lack of transparency about the developer and vendor of Rank math because there is no much information about the company and its origin.

but if you have done deep research about the Founding family of the Rank math, you will find that its origin from India and owned by the company called “Mythemeshop”. 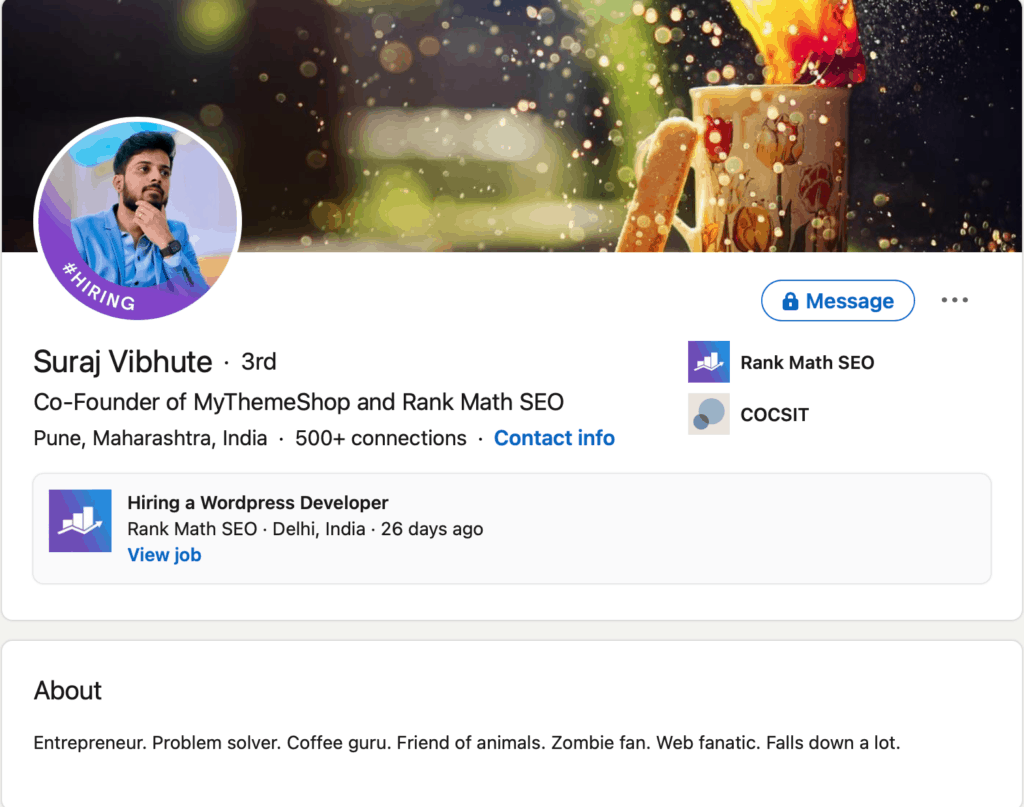 The most exciting part is the features of Rank math that has way better than Yoast. I am not going to say that Yoast is useless but compare to the Rank math, Yoast SEO lag at many parts where you need to access the PRO version in order to get the most of the features.

With the Rank Math FREE version, you can access most of the features to boost up your website by not spending few bucks.

Now let’s break down each and every interesting feature of the Rank math,

This list can go on, seriously just check out the Rank math website to learn more about the features they are providing us.

Not a single plugin, on this planet, has so many functional features under one plugin and that’s why it made me write an article about Rank Math.

If you still think Yoast or another SEO plugin is the best then, I have made a comparison table for you to understand more about why rank math is still the best for you.

I have illustrated the comparison table with more than 100 different features that Rank math has and a few of them Yoast doesn’t provide.